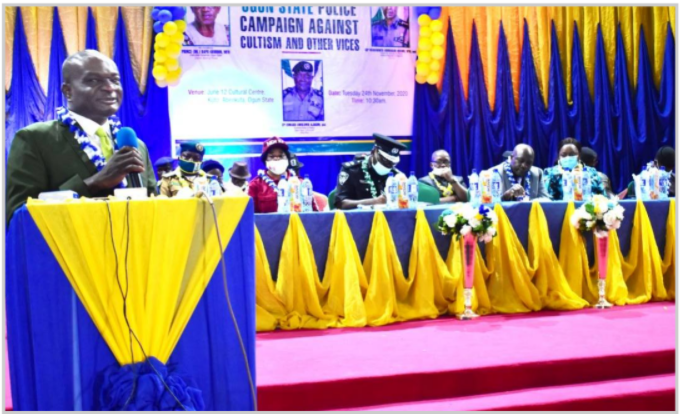 The Vice-Chancellor, Prof. Kolawale Salako has enjoined youths not to compromise their bright future for any reason whatsoever. The Vice-Chancellor gave this piece of advice during the official launch of the Police Campaign Against Cultism and Other Vices (POCACOV), Ogun State Police Command in Abeokuta, which was organised by state command of the Nigeria Police Force and the Ogun State Government.

Speaking at the occasion, the Vice-Chancellor admonished youths to bemindful of the fact that they would have to face the consequences of their actions outside the four walls of their campuses or institutions. He stressed the need for youths to be intellectually-sound by reading good books that could make them better persons in society and to desist from having the wrong mentality of get-rich-quick syndrome.

Prof. Salako called on all to make it a point of duty to ensure that our youths are well guided and not misled due to wrong information that are found mostly in social media. He said not every information is genuine and hence, people should scrutinise the information they receive to avoid being gullible and easily manipulated.

The Don recalled that in his university days, unionism was based mainly on ideology and principles unlike what is obtainable nowadays whereby many people engage only in ‘personalised unionism’ for selfish reasons at the detriment of the majority, as he made case for genuine mentoring to promote youth development in the country.

The Vice-Chancellor, who chaired the occasion, appreciated the state police command and the Inspector-General of Police, IGP Mohammed Adamu, for organising such an important programme that would promote constant police-community relations in the interest of the state and the nation. He
added that the police had been doing excellently well in assisting FUNAAB to curb anti-social behaviour within and outside the campus while appealing to those engaging in the habit of posting wrong information about the police on social media to desist from the unwary act.

The Guest Speaker and former Commissioner of Police in Enugu State, who also was a former Police Force Public Relations Officer, Dr. Emmanuel Ojukwu, in his lecture presentation titled; “Cultism: A Growing Menace and Destructive Element in the Socio-Economic Development of Nigeria”, identified some attributes of cultists to include cruel mentality, sadistic acts, indoctrination, brainwashing, self-Imposed martyrdom, sense of entitlement, intolerance, paranoia, mischief making and Resistance to the Society’s Norms.

Earlier in his welcome address, the Ogun State Commissioner of Police, CP Edward Ajogun Ogun State Police Command made a call to everyone to collectively rise against the scourge of cultism in the society, saying that Ogun State has had its fair share of cult groups’activities. According to him, the groups had been subdued following constant surveillance and monitoring of their activities.

Reeling out the 2019 criminal statistics in Nigeria, the Police Commissioner stated that 432 cultists were arrested and prosecuted in Ogun State, noting that the State Command would continue with the zeal to repress and subsequently eradicate the menace. He further stressed that the Nigeria Police Force, under the leadership of the IGP had been committed towards eradicating the menace of cultism and other social vices in the nation’s various communities through POCACOV.

The initiative is a community-driven programme in line with the tenets of Community Oriented Policing (COP), with the purpose of encouraging the involvement of the community and relevantstakeholders. POCACOV was inaugurated by the IGP on August 29, 2019 at BON Sunshine Hotel, Enugu, Enugu State. The objectives of the campaign include sensitisation of members of the public on the dangers of belonging to cult groups; re-awakening of the security consciousness of members of the public; inculcating moral values in the youths and re-awakening that of the adults as well as educating relevant stakeholders such as traditional rulers, town union presidents, political class, youth leaders, market union leaders and student leaders.