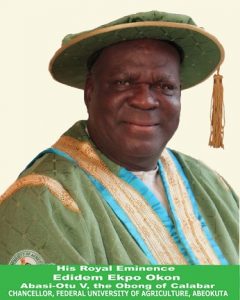 in the morning of the 20th day of November, 1949 and is reputed to be initiated into the Ekpe Efik Iboku confraternity on the day of his birth. His parents were Etubom Okon Abasi Otu Ukpong Mbo Otu and Madam Ikwo Okokon Ansa of Adiabo Ikot Mbo Otu. The current Efik Monarch therefore descends from Adiabo clan of the Eburutu tribe and is traceable to the founding ancestor of the Efik kingdom with the genealogical name Ekpo Okon Abasi Otu Ukpong Mbo Otu Meseme Ukpong Ukpong Atai Ema Atai Iboku.

The young Prince Ekpo Okon attended St. Patrick’s Convent and St. Mary’s Schools for his primary education and received his first school leaving certificate from the later in 1963. In 1968, he obtained his West African School Certificate from the famous West African Peoples Institute (WAPI) established by the first Nigerian professor, the late Professor Eyo Ita. At the age of 24 years, he obtained a diploma certificate in Telecommunications Engineering where he bagged the International Telecommunication Union best student award. The award conferment was made by the late Nigerian Military Head of State; General Murtala Muhammed who was then Minister of Communications.

Our current Monarch first worked as an assistant technical officer-in training at the then Post and Telecommunications (P&T) department of the Federal Ministry of Communications and became an outstanding trainee officer who rose to the position of Operations and Maintenance Manager in the Domestic Satellite Division of P&T. Following the deregulation of the telecommunications sector by the Federal Government, the young Prince got employed at the Telnet Nigeria Limited whose major client was Shell Petroleum Development Company of Nigeria. Here he rose to the position of Divisional Manager on merit from where he was called to serve on the throne of his ancestors.

Journey to the throne

Edidem Ekpo Okon Abasi Otu’s journey to the throne started when he was made a chief by his family and community in 1976. He became head of Ukpong Mbo Otu family and consequently the village head of Adiabọ Ikọt Mbọ Otu in 1999. In 2003 he became the clan head-elect of Adiabọ Ikọt Mbọ Otu and was capped Etubom obio by His Eminence the late Edidem Nta Elijah Henshaw VI, the immediate past Obong of Calabar, in 2004. He was made the Iyamba Ekpe Efik Iboku (President of the Ekpe conclave) of Otu Meseme Lodge at Adiabọ.

The installation, recognition and coronation

Following the demise of the immediate past Obong, His Eminence, the late Edidem (Prof.) Nta Elijah Henshaw VI on the 16th day of February, 2008, a suitable successor was found in Etubom Ekpo Okon Abasi Otu from the Western Calabar geographical bloc of the Kingdom, who was traditionally crowned at Efe Asabọ (shrine of the cobra) on the 3rd day of May, 2008. He thenceforth became His Eminence, Edidem Ekpo Okon Abasi Otu V, Obong of Calabar, Natural ruler, Treaty King and Grand Patriarch of the Efik Kingdom.
On the 11th of July, 2008, the new king was officially recognized by the Government of Cross River State of Nigeria and was presented with a staff of office as Obong of Calabar, in a public ceremony at the State Cultural Centre Complex, by the State Governor, Senator Liyel Imoke. Finally, the current Monarch was presented before God in keeping with the tradition of Church Coronation suggested by the late Queen Victoria of Great Britain in 1878, at the Presbyterian Church of Nigeria, Duke Town Parish in December, 2008. He was crowned by the late legendary Pastor Eyo Edet Okon of The Apostolic Church of Nigeria and admitted into the comity of world Christian Kings as the 78th recognized Monarch of the Efik Eburutu people.

Life as an Obong and achievements so far

The year 2008 in Calabar was filled with royal events primarily the traditional installation of the Obong, his presentation to the state government for recognition and finally the church coronation in December. The Efik Monarch; a member of the comity of world Christian kings and Knight of Saint Molumba of the Catholic faith, began his life as an Obong with a thanksgiving service at the Sacred Heart Cathedral of the Roman Catholic Mission on the 25th of January, 2009.

His ascension to the throne, it will be recalled, was plagued with court cases where a number of people came up with claims of better qualification to the revered Efik throne. The Obong identified the absence of written constitution as guide to selection of Obong of Calabar as a major reason for the spurious claims by some segments in the kingdom. He therefore set up a select constitution drafting committee to come up with a working document for the Efik Kingdom. The constitution was proclaimed in 2010 but was followed with heavy criticisms from sectors that felt left out in the general scheme of things. At the moment, the constitution is undergoing review and will be ready soon.

Following the emergence of Edidem Ekpo Okon Abasi Otu V as Obong of Calabar and Grand Patriarch of the Efik people, a number of dissenting groups took the Palace of the Obong of Calabar to court challenging the fairness of the selection process. One of such claimants was Chief Anthony Ani, a former Minister of the Federal Republic. On Monday, January 30, 2012, the Federal High Court ruled the case in his favour, claiming that he was the rightful candidate for the Efik throne. But the Obong’s Palace headed for a higher court (the Court of Appeal) to seek redress and on July 4, 2013, the Appeal court ruled that Chief Anthony Ani was not qualified to vote and be voted for as an Obong of Calabar. At the same time the court ordered that the selection process be repeated with the Obong of Calabar as contestant if he so desired as he was fully qualified to do so. The Etuboms’ Conclave, as a law-abiding group, obliged the court and His Eminence Edidem Ekpo Okon Abasi Otu V was returned as the Obong of Calabar, Natural Ruler, Treaty King and Grand Patriarch of the Efik people.

The Obong noted that the dwindling fortunes of the Efik kingdom in recent times are traceable to the tribal fragmentations and unfair discriminations, borne out of poor understanding of who the Efik people are. He therefore initiated steps to bring together all the descendants of Iboku who founded the twelve ancestral clans of the Iboku people so as to establish a cohesive and more robust kingdom which will shoulder all challenges responsibly. This, he says, will be done by reviewing the family trees of all Efik Houses and families which will surely help the people to make a more purposeful thrust into the future.
A very significant achievement of the current Monarch is his vision to set up an advisory and executive body in his royal court. The body is called Obong of Calabar Executive Forum (OCEF) and is made of Efik gentlemen and ladies who have excelled in their different fields of training/or endeavours; in Academia, Medicine, Law, Engineering, Security, Commerce, Industry and Politics pooled from all twelve ancestral clans. A brief on the organization and functions of this forum follows under discussions on the Palace of the Obong of Calabar.