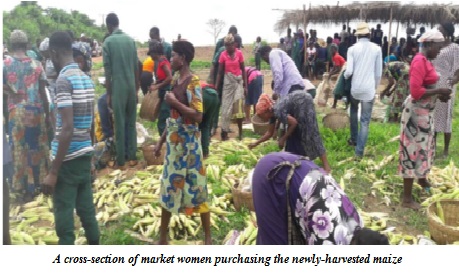 Scores of market women, who are maize sellers within the precincts of the University, have benefitted from the high discounted sales from the recent maize harvested by students working on the Community-Based Farming Scheme (COBFAS) and the Institute of Food Security, Environmental Resources and Agricultural Research (IFSERAR) farms of the University. COBFAS officially co-ordinates the Farm Practical Year (FPY) training programme while the Students’ Industrial Work Experience Scheme (SIWES) allows agricultural students to be distributed into four different rural communities in Ogun State, where they would take part in the programme as resident farmers. Commenting on the harvest and sales of the maize, participants had described the effort as successful because the students were able to cultivate five hectares of land, as the first set of the harvest generated great returns for the University, saying the ideology behind the establishment of COBFAS had been achieved. Furthermore, the students were exposed to the processes of agriculture, from planting to harvesting and marketing, while receiving comprehensive training that would enable them become employers of labour by establishing their own farms. Responding, one of the market women, Mrs. Kehinde Amoto of Progress Foods, said that she bought the maize to resell for profit purposes, adding that she would eat part of it alongside her family. Similarly, Mrs. Esther Sowole said: “I was here last year and now, I’m here, again. By the grace of God, I will come next time they call on us. The maize is good and the people in charge are nice to us”.

Reacting to the harvest, Miss Oluwatamilore Alade, a 400-level student in the Department of Animal Nutrition, College of Animal Science and Livestock Production (COLANIM), stated that the FPY programme had exposed them to real farming practices, noting that they had garnered much farming experience and that with the exposure, she was confident that she would be able to successfully start her own agricultural venture after graduation. Similarly, Mr. Familola Adegoke, 400-level student in the Department of Agricultural Extension and Rural Development (AERD), College of Agricultural Management and Rural Development (COLAMRUD), stated that the programme was wonderful, noting that he could successfully managed a farm, based on the training he had received during the FPY. They both pleaded with the University Management to provide a permanent shelter on the farm, to shield students from scorching sun and rain, in addition to erecting a wind-breaker, to protect the crops from being destroyed by winds.

COBFAS was established in December 2010, to provide a platform whereby agricultural students in their penultimate year of programmes are deployed to rural/semi-urban areas, where they are exposed to practical training in agricultural production, processing and agri-business enterprises, to stimulate their interest in agriculture and motivate them to take up agriculture, as a career.