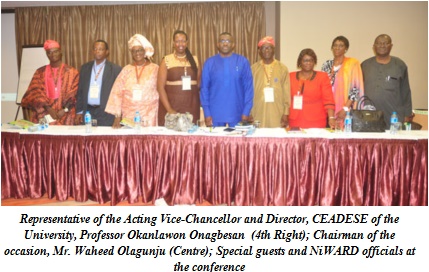 The Acting Vice-Chancellor, Professor Ololade Enikuomehin, has disclosed that agriculture had become a mainstay of the nation’s economy and that the future of Nigeria depends largely on agriculture. He added that for this reality to be properly harnessed, the pivotal role of the women in agriculture should be appreciated. Professor Enikuomehin stated this at the just-concluded 5th National Conference/Exhibition and Annual General Meeting (AGM) of the Nigerian Women in Agricultural Research and Development (NiWARD), which was themed; “Diversity and Inclusiveness in Agricultural Transformation”. “Women have a vital role to play in the agricultural activities, as most of these activities are done by women. We would like you to encourage more women to subscribe to courses in agriculture”, he said. The Acting Vice-Chancellor, who was represented at the occasion by the Director, Centre for Excellence in Agricultural Development and Sustainable Environment (CEADESE) of the University, Professor Okanlawon Onagbesan, enjoined all stakeholders to work together in ensuring that the full potentials of the country were realised by engaging in full agriculture. Speaking in the same perspective with the Acting Vice-Chancellor, African leaders have been urged to strengthen and increase investment, research and development in agriculture as well as engage more women, if the continent is to sustain the current momentum of improved Gross Domestic Product (GDP). Giving the charge at the NiWARD conference was the Director, African Women in Agricultural Research and Development (AWARD), Dr. Wanjiru Kamau-Rutenberg. She said that the “current trends already indicate growth in a positive direction with the World Bank reporting that agricultural GDP growth in Sub-Saharan Africa has accelerated from 2.3 per cent per year in the 1980s to 3.8 percent per year, from 2000 to 2005”.

She added that the African Development Bank (AfDB), has identified agriculture as the continent’s second largest industrial sector by value while McKinsey Global study estimated that agriculture in Africa would grow by 6 per cent, per year until 2030.

The Director of AWARD, therefore, advised Africans to decide whether increased food production would be part of an agriculture that followed previous paths of extraction to the export of Africa’s natural resources. She stated further that the fertility of African soils and the continued threat of the extraction and appropriation of resources did not build much prosperity for the continent.

Dr. Rutenberg noted that strengthening African agriculture would have significant economic impact that reaches majority of the population, stressing that Africa was at the moment in history, yet to decide to build an agricultural sector that would not only feed its people but could lift majority of Africans out of poverty because agriculture had been positioned to be a major driver of Africa’s economic growth. The Director of AWARD, who reminded stakeholders that women make significant contributions to agricultural production, but do not get as much recognition and opportunities to influence policy and decision-making, said there was need for greater efforts, aimed at making the agricultural sector more gender-responsive while concerted action from several actors, could lead to the birth of inclusive agricultural value chains, as a key agenda. She stated that AWARD had contributed positively towards the inclusive agricultural transformation through AWARD Fellowships, a career development programme, that had reached 465 fellows and 397 unique mentors (of whom 46 per cent were men) from 16 Sub-Saharan African countries.

Dr. Rutenberg commended NiWARD for being a shining example to many African countries. The Kenyan-born AWARD Director highlighted the programme’s Phase III Strategy (2017-2022), to include seeking to have capable, confident and influential African women scientists, to lead critical advances and innovations in agricultural research and development. Other strategies are: seeking to support African agricultural research and development institutions that would prioritise and embrace gender-responsive agricultural research in both policy and practice, as well as working towards creating an enabling environment, by ensuring that gender responsiveness became an embedded cultural norm and practice. The chairman of the occasion, who is also the Executive Director, Small and Medium Scale Enterprises (SME), Bank of Industry (BoI), Mr. Waheed Olagunju, in his remarks, stated that Nigeria was more of an agrarian country than an oil-producing nation. According to him, “We have a lot of natural resource endowments, solid minerals as well as oil and gas. For us to achieve inclusive growth and development, the living standard of our people is to be enhanced”. He said that if the per capita income of the country is to make meaning to the population, the nation must start with agriculture and continue to build on agriculture.

Mr. Olagunju noted that NiWARD was being driven and propelled by women, adding that there could not have been an inclusive growth without the women. “In terms of quality human capital development, our women have to be given credit. If you are a president of a country of whoever you are, you must have been given birth to, by a woman and your upbringing depends on the quality of your mother, as whom your mother was, when you were a child, matters a lot”.

He further stressed the need for the country to continue to strive to produce most of the equipment that the nation need to add value to production, if the country needed to domesticate its production capacity. According to him, “I am not aware of any other country that is more or better blessed than Nigeria. If I come to this world a hundred times, I would want to come as a Nigerian. I have been privileged and opportune to travel widely. My antecedent was in communication and by virtue of this, I had travelled all over the world”.

Comparing Nigeria with other nations of the world, he said that Nigeria had huge agricultural resources, as well as access to Atlantic ocean, noting the fact that, the country was not landlocked was something the citizens had been taken for granted. He stated further that Nigeria was better placed by virtue of its geographical location in West Africa, noting that the citizens should harness the potentials of the area.

On climatic conditions, the BoI Boss said that the nation had one of the best farming seasons, all year round, adding that the country also had marine resources across the length and breadth of Nigeria. He noted that the nation had what it takes to sustain life, stating that with agriculture’s per unit investment, the multiplier effect was higher in the developmental impact than other sectors, because the value chain is wide, whether vertically or horizontally. According to him, “If you are to invest a billion Naira in agriculture, almost everybody in the village or community will benefit because you need to clear the land, if you want to cultivate. To clear the land, people would be employed, jobs would be created and that is the beginning of inclusiveness. You have to cultivate, plant and nurture and afterwards, harvesting. While harvesting, jobs are created”.

Mr. Olagunju, however, stated that the country had not been able to add value to its natural resources endowment for ages, charging that “We need to add value, we need to process, we have more than enough to feed our country and also export”. He, therefore, noted that “If you have a correct business model in agriculture, you cannot go wrong because food is the most basic need of mankind. You need to eat before you start talking of shelter. From the garment industry, it starts from cotton, which is an agricultural produce. When you die, you would be clothed and not bury naked. From cradle to the grave, we cannot do without the product of agriculture. We need to eat throughout our lives”, he added.

He stated further that for the nation to get to its desired destination, the country cannot be carrying out agriculture, the way it had been practicing it, noting that research and development was very important. Mr. Olagunju observed that the youths needed to be encouraged to go into farming, juxtaposing the achievements that the Federal Government recorded in the telecommunications and banking industries, which was unprecedented in the history of the country. He noted that such feat was of world standard, stressing that everyone should join hands with the Federal Government, by putting all efforts into agriculture so that the momentum could be sustained.

He said that BoI was proud to be associated with the process, saying that most of the equipment the country used were still imported. “We need to increase the extent to which we are self-reliant. For us to be self-reliant, we must have food security, which is food sufficiency. This could not be achieved without proper research and documentation. We have to link research with the industry. For instance, in Europe, we have cows that can produce about 50 litres of milk per day while in Nigeria, we are still struggling with cows that produce one litre of milk, per day. With a population of about 200 million, how can we achieve food security? Yield per hectare is much higher in some countries of the world than in Nigeria”, he asked.

He commended the initiative of the NiWARD officials, saying that it was in order and consistent with the country’s national objectives and priorities. He noted that the country could not be industrialised without agriculture, assuring that any initiative that was potentially valuable and bankable that came out of these processes, would be funded by BoI. He stressed that BoI would continue to assist entrepreneurs for their businesses to be viable and sustainable.

At the occasion, the Dean, College of Food Science and Human Ecology (COLFHEC), Professor Lateef Sanni, stated that the College perceived agriculture from the point of view of what should happen to it after it might have left the farm, and through the home to the table, and when the fork starts to do justice to it. Represented by the Deputy Dean of the College, Dr. Adegoke Bakare, the Dean said that the College’s vision was to ensure that “we advance good quality of life and ensure sustainable development. Every asset depreciates and there is only one exception, which is the women. They don’t depreciate. A proof of that is when a man takes a young lady for a wife, she calls her by name and when she gives birth, her child’s name is used to call her and when she grows older, her husband begins to call her ‘mummy’. And for us, to achieve our agricultural goal, instead of relying on renewable resources, why don’t we start with those assets that can never depreciate?

Earlier, the Chairperson, Local Organising Committee (LOC), of the 5th NiWARD AGM, Professor Folake Henshaw, had appreciated the dedication of the committee members in making the event a success. Highpoint of the conference was the presentation of Awards of Excellence to individuals that had identified with the cause of NiWARD. They include the immediate past Vice-Chancellor of FUNAAB, Professor Olusola Oyewole; Founder, NiWARD, Professor Stella Williams; former Dean, College of Animal Science and Livestock Production (COLANIM), Professor Daisy Eruvbetine; Professor Delano Adelekan and the former Director, Vice-Chancellor’s Office (VCO) of FUNAAB, Mrs. Christiana Kuforiji.